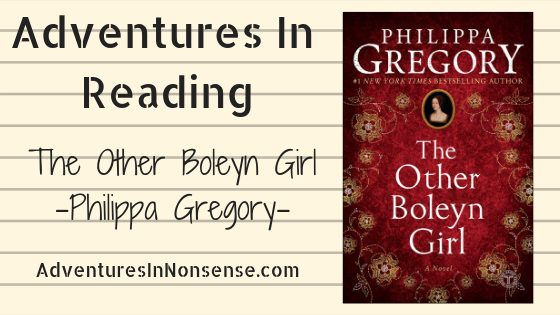 In all fairness, I started The Other Boleyn Girl by Philippa Gregory before Christmas. It was one of the longer books I’ve read as of late, so it took me a bit to read! Tudor England and the Renaissance and all of that time are so intriguing to me.

The Other Boleyn Girl is historical fiction surrounding King Henry VIII and Anne Boleyn. The novel first starts when the youngest Boleyn daughter, Mary, has been married and moved to court. Henry takes a liking to her. In this time, women in families are essentially game pieces that you can play to win. Thus, Mary’s uncle, the Duke of Suffolk, decides that Mary should forego her husband and become mistress to the King of England.

It works fairly well for her! She falls in love and bears Henry both a son and a daughter. However, Mary’s sister, Anne, then comes to court after growing up in the French court. Henry, of course, loves her. She’s smart, sassy, and certainly challenges him. He wants her to become his mistress now. Anne, being the more ambitious daughter/sister has grand plans of becoming Queen of England. There’s just one problem. There’s already a legal queen by law, and Henry’s wife by religion.

From there, the rest is actual history. Henry petitions the Pope to annul his marriage to Katherine. She hasn’t been able to bear him a son, so he’s ready to move on to someone younger and better fit. The Catholic Church says no, so the Church of England is born. Katherine is exiled, and Anne ascends to Queen after her wedding to Henry. The English people are not pleased.

This is where things got a bit dicey for me. They get married and all that. Henry has already proved that he doesn’t abide by rules or marriage, so he starts to find his next “flavor of the month” in Jane Seymour (a daughter of another family trying to ascend). Anne gets angry and fights back.

Henry then tries her in court for infidelity and witchcraft, saying she seduced him that way.

This is where I don’t understand. There’s mention of a core group of gentleman around Anne, including her brother George. There’s never any mention of…inappropriateness. There’s some allusion to incest though with Anne’s monster baby. Regardless, she’s found guilty (even by her own Uncle who put her there!) and beheaded.

Luckily enough, the movie is on Netflix! I was super curious to see how they turned this story and all of its details into a movie. First of all, it wasn’t very accurate. They skipped over both children and miscarriages. William Stafford, Mary’s second husband, is barely in the movie. William Carey, her first husband, hardly says a word! I got up to use the restroom without pausing it, and I may have missed his death, though I’m not sure.

As for Anne, she is exiled to French court only for a couple of months after messing up her first meeting with the King at the Boleyn/Howard estate. She has much less to do with her sister Mary than in the novel. Her “marriage” to Henry Percy takes all of 3.5 seconds. Magically enough, Henry Percy only has one line in the entire movie, and he votes her as “guilty” before she’s beheaded.

If you’re looking for a more accurate and detailed story, invest in the time to read The Other Boleyn Girl. Don’t watch it. I was a bit disappointed.

Somehow, reading The Other Boleyn Girl has awakened a new love for that time in history. If you follow my #Bookstagram, the next book I’ve pulled is The Autobiography of Henry VIII by Margaret George. She’s one of my favorite historical fiction authors, so I’m excited to see where this one goes. It’s over 900 pages, so it will be quite a while before I finish.

Note: This post contains affiliate links, so I may receive a small commission from sales generated. Thank you for your support!

One Reply to “The Other Boleyn Girl by Philippa Gregory”

I finally feel like a “big girl” with my home

Thank goodness I have something else to celebrate

MY DAD MADE ME THIS DESK. AM I THE LUCKIEST OR WHA

Four post about Olivia in a row? Whatttt? I’m ob

From day one to today. ❤️ Happy (maybe) Birthd

Dad is making me a desk for my birthday, so that m

This weekend, I started developing a “print on d

New blog up on adventuresinnonsense.com! This is a

We spent Christmas apart which means that Santa ca

Time for my annual #TBT trip to one of my favorite

In case you missed it, I’m running a holiday boo

If you know Olivia, you know how wiggly she is. I